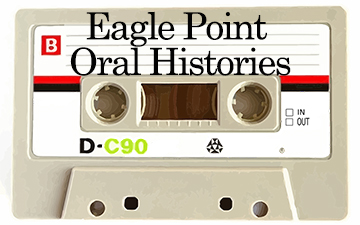 Carol Barrett interviewed more than 30 long-time Eagle Point residents in 1989 and 1990 in support of her work to document and inventory historic buildings in the city. While excerpts from these interviews were included in the completed Inventory of Historic Structures, there are many stories that were only loosely related to the buildings. Listen to the voices, the words, the memories, the kindly gossip and appreciate Eagle Point over the last 100 years through the lens of its people.
Not everyone that Barrett interviewed was forthcoming. Some were hesitant and took a while to open up and some needed specific questions in order to respond. Barrett's amused musings are a delight, as are the stories she evoked. Some recordings are less than distinct as the interviews were conducted in homes with dogs barking and children running, or maybe the television was loud. Sometimes Barrett caught up with folks at community gatherings and you can hear the commotion in the background. Three recordings, those of Emiley Gregg, Dorothy (Cox) McDougall and Thieda Peyton were too indistinct to hear and so are not included in this collection.
The master copy of the audiocassettes are held in the City of Eagle Point administrative offices. These were digitized with an audio out from a Panasonic RX-D55, captured with Audacity, enhanced with an adaptive noise reduction process in Adobe CC2020 Audition and exported as lossless .wav files.

Uploaded by Stories of Southern Oregon on January 9, 2021